Jessica came to us on the advice of CAFCASS. Having suffered an abusive relationship, she was seeking to have her ex-partner removed from her daughter’s birth certificate. He was not the child’s biological father and Jessica felt he had no say in her daughter’s welfare. Despite the accusations made against him, she had been subjected to court orders made by her ex-partner, restricting her access to her daughter.

When she arrived, Jessica was seriously worried. She was concerned that her ex-partner would take her child away from her. She was also anxiously awaiting a call from her GP to support her claims that her ex-partner had been violent towards her. In regards to the case against her ex-partner, I explained there was little we could do but wait for her GP’s record and a possible hearing date. So I took Jessica to the court desk to find out how we could change her daughter’s birth certificate. I offered her support in liaising with any external sources, such as legal aid. She said she needed help with her forms. I helped her to complete the forms and directed her to where she needed to hand them in. I also assured her she would be more than welcome to return to us if she needed help for her hearing if she didn’t receive legal aid funding for a solicitor.

As well as helping her with the forms, I listened to her story throughout her time with us. It was clear that she felt unsupported without any legal guidance or representation and no one to support her claim. Despite her being worried before she visited us and concerned as to what she could do next, I assured we could help in the future.

Neil shares his experience of using our charity's support
Going to court is one of the most nerve racking and serious things that can happen in a person’s life. In my case I used the family courts. With the lack of legal aid, I was very concerned that I would make mistakes with the paperwork. There are people that offer to help, but they all charge for the service and in most cases you have no idea if they are competent to do so.

I heard about the charity during a visit to the family courts and decided to visit them for help. I was very pleased with the service. The staff were knowledgeable and friendly. It was very reassuring to get somebody to go through the paperwork with me. I can imagine that it could also save the court time and costs by having correctly filled in forms.

I only wish that my local family court had a similar service. I feel that my children are relying on me to engage with the court in an appropriate way and the service helped me to do so.

I would definitely recommend this service. It has the potential to change people’s lives.

Ernest arrived at our charity after he had been threatened with eviction. He was an elderly gentleman and his carer accompanied him. He had a hearing regarding rent arrears and asked if we could help.

Jean first came to our charity with a case involving her 27 year old son, Theo, who has life-long learning difficulties and autism.

As Theo is an adult, she wasn’t being included in important decisions about his care. She was worried because she could see the level of care he was receiving was causing his health to deteriorate, and she wanted the court to appoint her as his ‘Deputy’ so she could make decisions on his behalf.

When Jean arrived at our charity, a volunteer named Dan helped her prepare the complex court files for the case, and together they researched online how to put them together.

In court, Jean faced two barristers, a solicitor and a court-appointed guardian:
“I was overwhelmed, intimidated and felt very alone. My son’s healthcare provider was trying to deflect their inadequacies by criticising me - I was accused of interfering and being too controlling. It’s demoralising to hear people say negative things about you, especially in a court-room. The situation was so stressful and overwhelming that I began to feel ill, experiencing chest pains, indigestion and stomach problems.

If you can’t afford legal representation, it’s very easy to feel lost in the court system. Thanks to this charity, I had support in court and during the pre-court negotiations with legal professionals for the other side. My volunteer encouraged me to speak out with more confidence, even when I felt terrified and intimidated. At first I felt the judge related more to the opposing barrister than me, but the volunteer talked me through how to address him and how to present my case in a factual way. By the end I felt I had earned his respect.

Whenever I visited the charity to discuss my case, complete forms and write statements, the office was always busy with people like me asking for help. Unless you have dealings with the courts, you just don’t realise how many people in this situation exist.

When you can’t afford legal representation it can be very difficult conducting a case in court alone, but the charity offers a tremendous service. The team are a dedicated group of people doing a great job. I am very grateful to Dan and the charity for offering me support when I needed it most.”

The difference we make 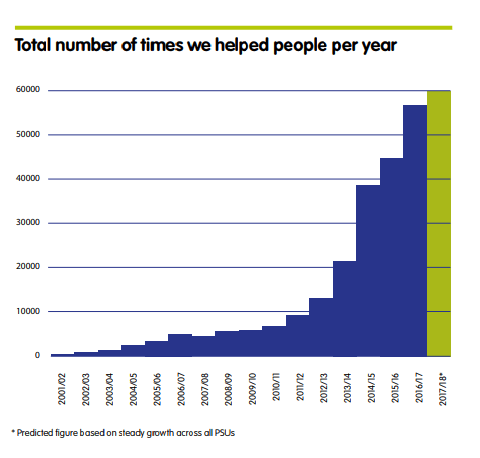 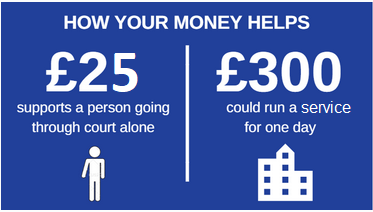 Your help makes our work possible. There are numerous ways you can support our charity.

How You Can Help